Very few elements in the periodic table are considered stable. In the less atomic, more geologic world, many objects widely considered stable are actually defined as “metastable”, or practically stable. An example of this is a diamond; supposed to be forever, but is slowly and surely transforming into graphite, another form of carbon. Another would be glass; where some think of it as a solid, it is actually an extremely slow-moving liquid only feigning solidarity. Metastability is the idea that objects always shift into another state, but over an extremely long period of time.

At a human scale we often carry a metastable perspective of life itself, conflating how things are with how they will always be until a rupture of past assumptions happens and we then have to redefine the concept of stability for ourselves. For instance, we take comfort in the assumption that the atmosphere will be fine regardless of how many greenhouse gases are injected into it until we notice a hole in the ozone layer or watch a crack in the Antarctic ice shelf get bigger than 20 Manhattans.

We move through this world with innumerous assumptions where perception and reality blur, until some critical fork in the road refocuses the world around us. For some, it was the tipping point of the global temperature where there will be irreversible global climate change. In another entropy-based system — the dance music industry — this tipping point concept goes by another term, “the drop.” The Drop or Bass Drop is a sudden change in rhythm or bass line, preceded by a build-up section and/or break. The drop is a moment that many consider to be materially singular, something you can point to, but has its roots in the build-up long before and is only a tonal signpost telling you there’s no going back. These sonic and environmental tipping points are alarms that a drastic change is coming. Whatever stability we think we’re dealing with is about to change and fast. But what are those in power doing about it? 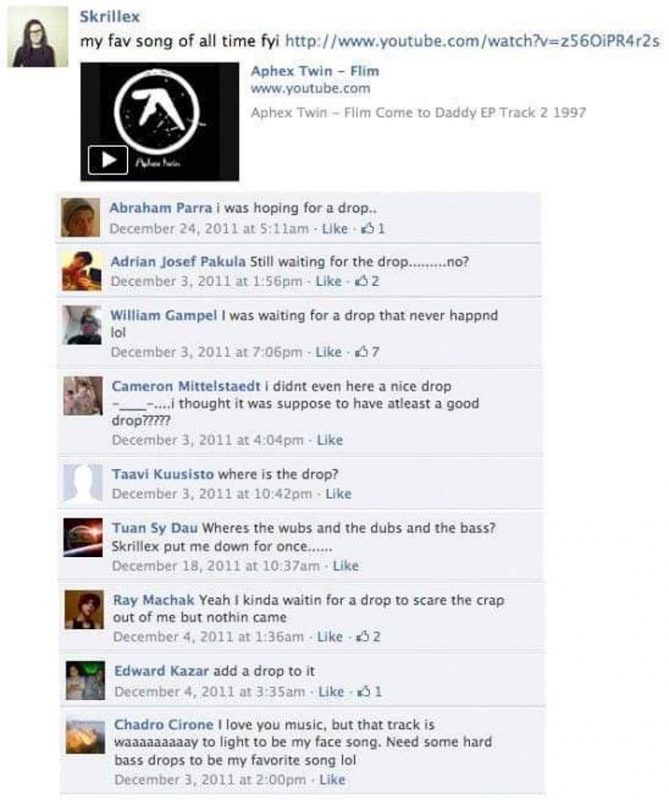 The drop is another metastable example found not just in dance songs, but in the dance music industry writ large; how the insatiable stomach of capitalism empties whatever life was left for the ability to sleep at night thinking that only the hardest working singular geniuses of their craft deserve proper investment and not the ecosystem that facilitated their growth.

Another sort of drop, the album drop, widely shown to be a viable method of release after Beyoncé’s 2013 self-titled, has now cannibalized the music industry, culminating in the once weekly, now (potentially defunct?) monthly rat-race that is Bandcamp Friday. As our email inboxes are inundated with notifications from all our favorite artists all vying to benefit from the one day where they are appropriately compensated for their labor, it’s worth pausing to consider: how does this monthly overanxious storefront affect our valuation of the art? Is this the alternative to the streaming wars? The incentivized atomization of scenes can’t be the result many have fought so hard for.

Streaming already placed artists on an optimization path towards releasing as much and as often as possible to attain as many plays as possible, leaving the less prolific between rent and a hard place. With Bandcamp Friday, this new monthly format has only accelerated this incentive to release something not just frequently but every 30 days alongside all of your friends-cum-market competitors. This is not a stable business practice. So why have those in power continued to move with these assumptions? This destabilizing market only allows for growth of the singular, not the collective. What happens to a space when someone from outside it projects their own hierarchy upon it? Cherry picking only a few leaving the garden to rot.

Stabilization in cultural spaces often follows a fated demise/reemergence paradox with the introduction of an innovative idea throwing convention off its axis only to achieve another valance state. Like a phoenix rising and dying by its own ashes, delta blues begets rhythm and blues begets soul begets rap, etc. etc. This unstable growth-decay is intralinked with the environmental and cultural geographies that artists inhabit. This beauty of creative communal intelligence is the cornerstone of cultural creation.

In 1996, David Bowie spoke in an interview about the art market’s process of singling and elevating select artists in a scene, only to kill the very scene that allowed for said artist to even exist amongst contemporaries that are just as worthy of appreciation:

…In the established art world it’s fundamental to keep the mystery in place because once it falls into the hands of the proletariat, that the ability to make art is inherent within all of us—it demolishes the idea of art for commerce and that’s no good for business.

An example of this is how two or three of the 80’s signing scene, like Haring, Basquiat, and Scharf, were taken from the scene and elevated to such a high plateau so quickly to show everyone else that there is in fact something special about them [so] as to make them unavailable aesthetically to a low art market, to consign the art world to a particular world. 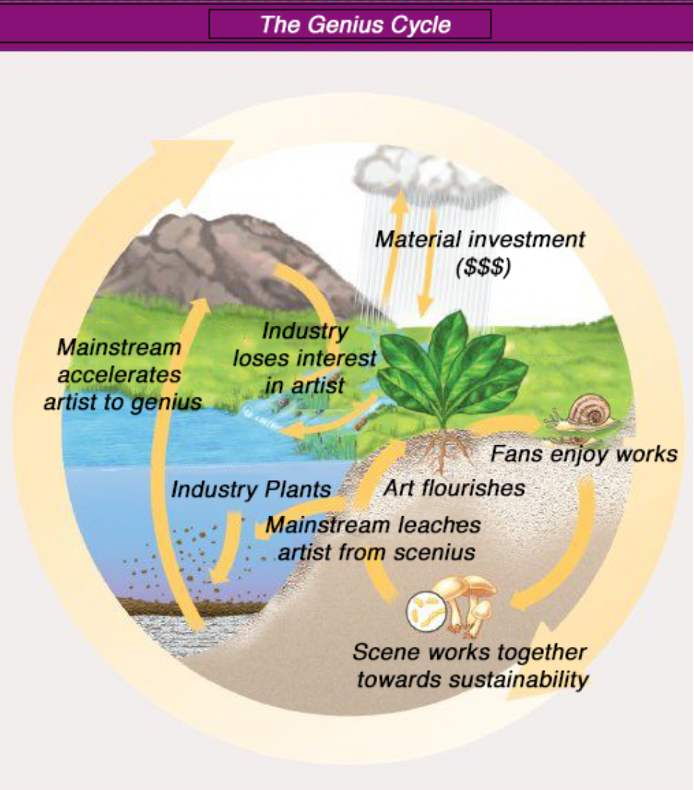 Brian Eno provides a counter-praxis towards the demystification and deconstruction of the capitalist labelling of genius; the “scenius”. The scenius acknowledges that an artist is not a sovereign upon themself, that there’s a passive (and/or active) communal intake of ideas that could only occur in the space provided. Cooperative intelligence.

I think although great new ideas are usually articulated by individuals they’re nearly always generated by communities… Being an artist you hear a lot of talk about genius which is the process of singling out certain people in art history [but] whenever you look at any of those artists you find that they lived and drew from a very, very active flourishing cultural scene and they were only one of the elements in that scene all these people who are called genius actually sat in the middle of something that I call scenius.

To achieve a scenius, Eno speaks of a collective investment through some form of basic income so artists can focus on building this cooperative intelligence and not the market:

What I want to see is more attention given to that possibility of creative behavior so what that means of course is two things one of them is the understanding that all people are born unequal so everybody has a particular and unique set of gifts and talents whatever they are and secondly that intelligence is generated by communities by a cooperation of some kind, so I suppose the thing the biggest obstacle to that at the moment is that people have to earn a living.

The modern dance music industry was successful in reifying this cultural fabrication of singular genius that Bowie spoke to in the late 90s, allowing for the simultaneous meteoric rise and crash of the dance music industry. As the dance world finds itself around more money than it has ever seen, it also finds itself upon a neo-Ozymandian landscape amongst broken DMCA’d YouTube clips and dystopic moments like David Guetta playing an MLK EDM track for George Floyd atop swanky rooftops. Where dance once thrived in the Paradise Garages and the Chicago Warehouses of the world, DJ’s now bounce for a Red Bull board of investors. On the other side of the coin, we have the most recent battlefront of the streaming wars on Bandcamp, with everyone in the scene vying for the same recirculated dollars between the same 100 people to land on them this month. Many cities where dance music thrives (e.g. New York, Chicago, Detroit, New Orleans, etc.) love to advertise their cultural roots but have historically produced little to no infrastructure to sustain what makes these cities so great: the artist.

The generous language of the term “underground” assumes an environment that provides potentially fertile ground for its people. Unlike the ever-hungry allochthonous channel that is the mainstream, pulling an artist away from the scene from which they only to present them as the newest and hottest rising star for the sole purpose of accruing capital, the underground implies an interconnected and stable system rooted in a place and space in need of intention. For any true stabilization to occur in the dance music world (not industry), we must commune for each other’s sake and rid ourselves of the Randian concept of the singular creative. As much as we use the term, community, it has been bastardized as a tool to individually prosper. No gods, no geniuses, no rising stars, and no drops. Only nurtured spaces. Ecology is the answer.

View all posts by Ryan Clarke