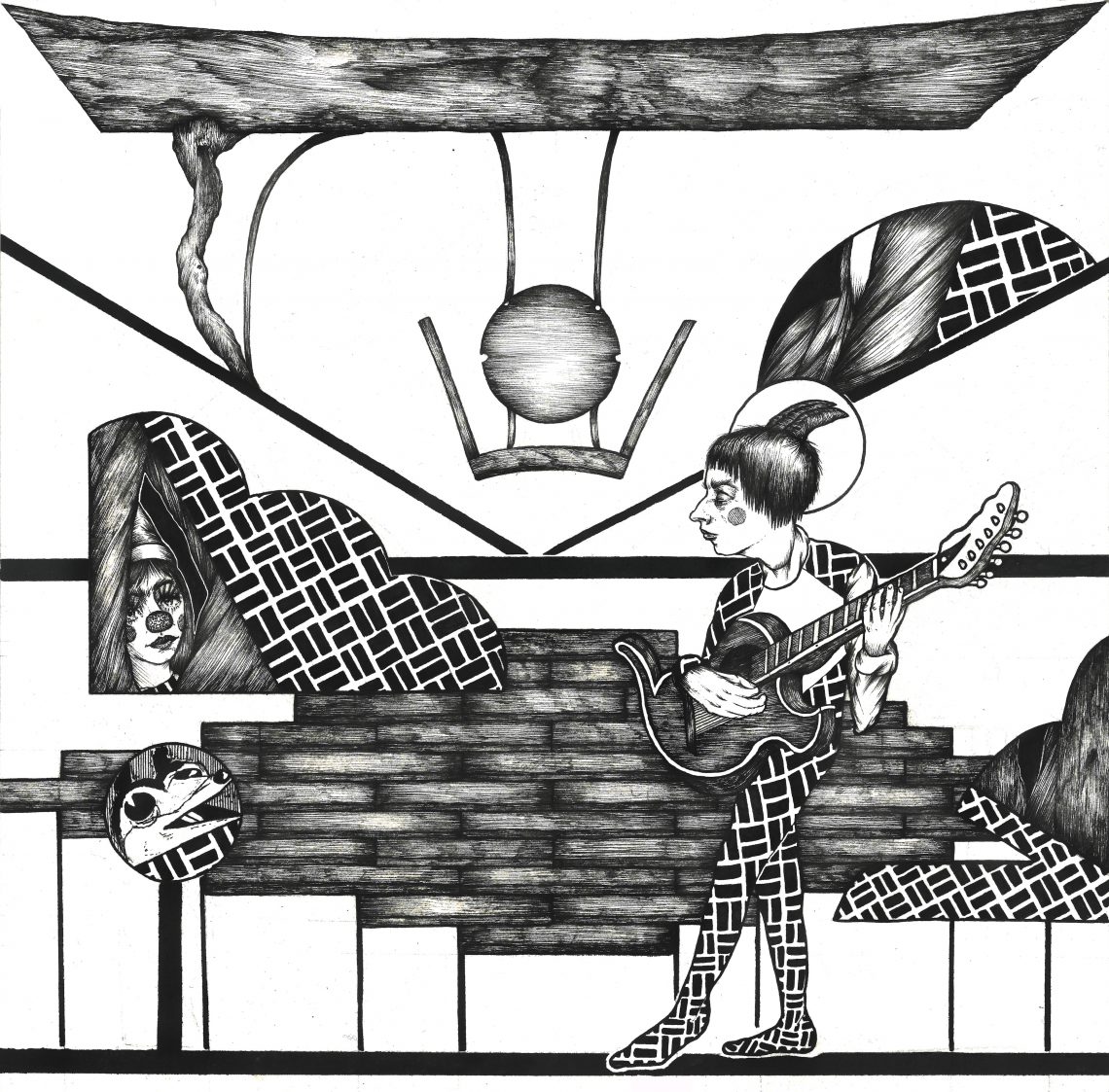 Often when illustrating a series of concepts or an idea, I find myself seeking a balance between intense gathering and empty physical execution. In my research for Echoes in the Clothes, I pulled a lot of inspiration from Harry Partch’s album Revelation in the Courthouse Park (1960) and the conceptual design of his instrument the Quadrangularis Reversum. From this perspective, I chose to add my own reinterpretation of Euripides’s The Bacchae. I incorporated Partch’s history as a California native and staged a theatrical setting using designs inspired by the Quadrangularis Reversum.

Partch saw his music as corporeal and in his book The Genesis of Music he states that after Bach music in many ways became rigid; we negated other worlds’ music with the adoption of the 12 tone harmonic system. I drew the floor of Dionysus’s stage based upon the diamond shape of Partch’s Quadrangularis Reversum. The breakaway from conventional Western tuning was fundamental to his compositions and the construction of his specialized instruments. I saw the keys that were situated in a narrow rhombus shape on the Reversum to offer a grounding shape for the stage.

Visually, the headboard of Harry Partch’s Quadrangularis Reversum seemed to have a looming quality: looking down upon its audience with an elegance like stained glass in a cathedral or the way in which Hollywood sign rests above the urban horizon line. There’s something so cooly aware in a California kind of way about how it looks like a piece of driftwood that washed up in Mendocino, which it very well might have been.

In keeping with Partch’s theme of granting Dionysus a transfigurative form (Partch chose to shape him like an Elvis prototype), I cast him as being a sort of androgynous Ziggy Stardust with fawn horns and a Byzantine halo to represent his deity status. He plays his guitar-like Thyrsus while straddling the stage and the orchestra pit to convey his plight of being both mortal and divine.

Stage right features the head of King Pentheus, freshly decapitated by his own mother Agave. In The Bacchae, he is mistaken for a wild animal before the maenads descend upon him and seal his fate. A symbol of order and the antithesis of Dionysus, he meets his fate as a result of his identity. I gave him this sort of mange-infested face, like Mickey Mouse in a fishbowl, to demonstrate the kind of ominous controlling myth that the Disney enterprise holds over Los Angeles. Ultimately, the lines that divide up the surface of the paper describe more of the given intent than I can with words. The preliminary research was digested and shortly after was obfuscated in order to allow myself playfulness devoid of Penthean order to indulge in creative gesticulation. The nexus of this piece comes from that relationship between learning and unlearning amidst the creative process.