I’ve been living in Pasadena for nearly three years without a car, which hasn’t been without its share of grievances. It has become a personal game of chicken to see if I’ll give up and buy a car as well as a self-motivated effort to be proactive and use mass transit to reduce my carbon footprint. As you might have guessed, I spend a healthy chunk of each day walking from A to B. Despite some errands being particularly annoying on foot, I’ve come to really value walking around Pasadena, so much so that I’ll often walk as a kind of recreation.

Lately, I’ve been planning my walks in order to explore a neighborhood or to seek out field recording opportunities. Some walks are primarily improvised while others are highly structured. An improvised walk will start by trekking to a specific location and then wandering. For instance, I’ll start by walking from my house to a quiet garden on the Caltech campus and then roam the area in and around the campus, sometimes walking as far south as Lacy Park in San Marino. In contrast, a structured walk is created by planning a shape around the grid of the city. For example, I like to walk in a spiral from my house, gradually expanding by one block at a time. Because I live close to a freeway, and not every street crosses the freeway, these spirals will often favor either the east or the west — rather than radiating evenly out of the center — depending on which direction I started the walk. 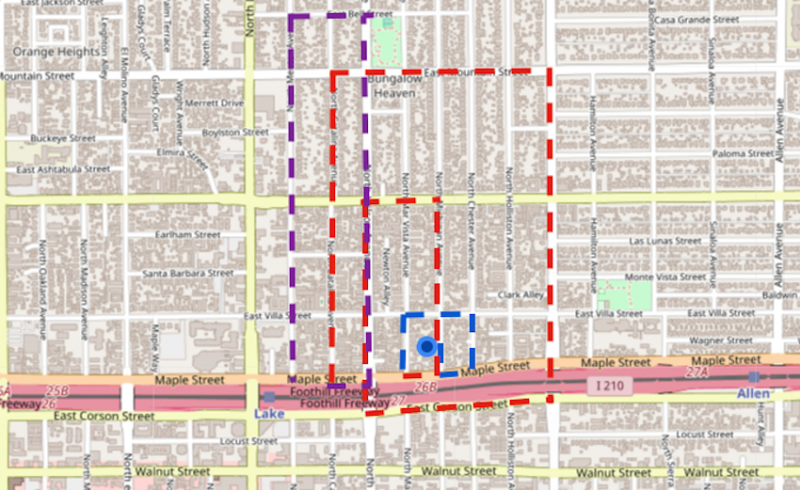 Following this lopsided spiral shape was the initial inspiration for san gabriel loops, a new series of compositions conceived while roaming around the valley. As the title suggests, the primary technique of each composition is invariable repetition — looping recorded material over and over without any deviation. For those compositions completed so far, I have recorded densely layered improvisations using samples, contact mics, and sine tones directly to a cassette tape loop 3 to 5 seconds in duration. A loop was then recorded into Audacity (a digital audio workstation) for some period  between 13 and 30 seconds, resulting in a phrase made up of several iterations of the same material, with the final iteration incomplete, cut short by this arbitrary window of less than a half a minute. This cut was motivated by the way my walks are blocked by the freeway forcing me to restart the spiral each time. The larger phrases, consisting of several of the smaller tape loops, were repeated invariably for up to 5 minutes (similar to the experience of hearing the chorus of a song on loop via Instagram and the way that platform’s limits might prevent a clean loop). Both the construction and presentation of the san gabriel loops are also, in part, an effort to strategize traits in a collection of what I think of as noise anti-patterns.

At a time when I was listening to a lot of Necrotik Fissure, a Hungarian noise project, I had the idea to amass a list of anti-patterns in order to design constraint-based algorithms for generating a harsh noise wall. The noise anti-patterns became the focus of many of my walks as I enumerated traits of organized sound that I couldn’t find an analog to in environmental sound. In working on this list, the idea evolved into an effort to better understand noise. The list of anti-patterns has expanded and contracted over the past months to accommodate new ideas and experiences. In its current state the list includes: exposure, finitude, intelligibility, intention, invariability, predictability, and relevance. Some of the members of the list are not necessarily traits of sound, but instead other classes of noise, such as cognitive noise (intelligibility, intention) and those that challenge the limits of perception (finitude). Still, I find that it translates very well into a listening exercise: identifying which of the sounds may or may not have the qualities of noise.

Several walks later, in the shadow of a vocabulary for classifying the perception of sounds and the first 7 compositions of san gabriel loops, I’ve arrived at a sort of personal definition of noise: (noise) is the absence of perceivably organized sound. My definition is effectively the complement to Varése’s definition of music and through it silence is among the most pure representations of noise. I’m not attempting to argue that, through the noise anti-patterns, natural sounds are somehow unorganized — ultimately, an observer is organizing the sounds of his environment through the simple act of choosing to give attention to or ignore them. Instead I’d like for this conclusion to emphasize an observer’s ability to make sense of organization. As I lose a grip on intelligibility, I begin to perceive traits of noise and vice versa. My intention is to illustrate this thoroughly in san gabriel loops. Within the 3 – 5 seconds of recorded material, many sounds occur. If you were to only hear this short clip once, you may be hard-pressed to give an accurate transcription of what was played back. I’m experimenting with lapses among experience, categorization, and recognition by presenting material in direct, invariable repetition; this is an effort to normalize noise into something mundane.

With these tools, I plan to continue work on san gabriel loops and broaden the noise anti-patterns to include more classes of noise. And in the tradition of much of my musical output, I’ll just sort of end here.

Andrew Young enjoys drinking coffee, playing with computers, and experimenting with sound and image. His most recent musical practices explore the sensation of noise in recorded media. As a member of the wulf. since 2013, he has participated in presenting nearly 200 programs of experimental music free to the public in the Los Angeles area. He resides in Pasadena, CA where you can usually find him wandering on foot or enjoying an Amigos margarita.

View all posts by Andrew Young